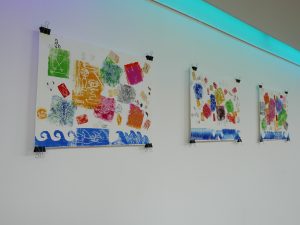 In 2017, Kala Sangam delivered an inter-faith project funded by Near Neighbours Small Grants. Kala Sangam worked with Anand Milan Centre, a Hindu community centre, and members of Buddhist organisation, Soka Gakkai International. These two communities, have seldom come together to appreciate each other’s faith. This project aimed to bridge gaps between the two communities to appreciate and understand one another through ice breaker sessions, comparing and contrasting similarities and differences thereby creating a long lasting community friendship beyond the life of this project.

Participants took part in creative printmaking workshops led by artist Cat Scott, during which they learnt about each others’ faiths and expressed their findings through creative practice. Both groups learnt that they had far more in common than they expected and established new friendships which we hope will last for a long time.

Read more about this project